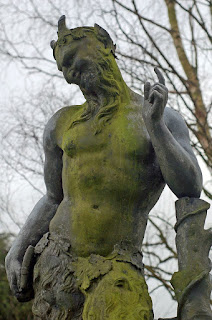 Of all the exercises that the Golden Dawn offered that were of value, the absolute greatest of them is the assumption of God-form. This is an excellent exercise for aspiring mediums and those seeking control over their mediumship. I was not aware of my gifts as a medium (although I think I had suspicions) until I started practicing the assumption of god-form and the practice of invoking deities.

My earliest success with this practice came almost 17 years ago when I discovered Aliester Crowley's Hymn To Pan in an old hardcover copy of his Magick. Mind you, I believe that Crowley should be taken with a grain of salt and a laxative as his notions are deliberately way off base, however, a broken clock is right twice a day.

Even reading the Hymn To Pan silently to myself I began to be filled with an otherworldly notion. It seemed as if a wild energy began to flow through as I excitedly read the words. I found myself working to memorize the Hymn in an afternoon so that I could enjoy it whenever I pleased. Around this time I was reading Donald Michael Kraig's Modern Magick, and was learning some basic Golden Dawn Magic techniques.

For a little over a month I would sit quietly and relax myself. I would gaze at various images of Pan and satyrs. I would begin to recite the Hymn and imagine the shape of the god formulate around me. I would begin to feel my consciousness expand into the image, all the while visions of satyrs and nymphs would fill my mind. Gradually I would wind myself down from the ecstatic state and ground myself by touching things around the temple.

I noticed during this time period that my life was becoming VERY interesting. It seemed like I was always getting invited to parties and my sex life had never been so wild. There was a charm in the air around me and I noticed that people seemed to center around whatever I was doing. People would often give me things for free and my social life was expanding.

I wanted to see how far the experience could go and I decided that I wanted to formally invoke Pan. I told some other young magicians that I was acquainted with about my desires, and everyone agreed that they wanted to make it happen. We convened at another magician's house because it was centrally located and the space could accommodate the small crowd. We brought a bottle of wine for the god to drink and some bread for him to eat.

The ceremony opened with a Lesser Banishing Ritual of Pentagram and followed with the Greater Invoking Ritual of the Pentagram. I burned an incense that I had made from cedar, pinion, vetiver and other resins while asking that my prayers be heard. I stood between the pillars temple and began to recite the Hymn. As I did the other magicians began to chant, "IO Pan! IO Pan!"

Waves of ecstasy washed over me and I felt as though I was transforming into what had previously been an image in my mind. I felt horns protrude from my forehead, and my feet twist into hooves. My voice changed into the sound of a goat baying when I would try and say, "IO Pan." Eventually I lost all sense of self and everything disappeared.

When I came too, I looked around the room to see an expression of shock on every face. It seemed as if just a moment had passed, but each magician informed me that they saw me change before their eyes. They said I looked like a satyr and began baying like a goat. That I then grabbed the bottle of wine and drank the whole bottle in a few gulps, and then began to give an oracle to each person present. I informed them that it was not me but rather Pan that had done so. There was no doubt in the room that a god had just been present.

I maintained a very special relationship with Pan for many years after that. Eventually, I felt that he brought me to the place I needed to be and that we both needed to move on. However, those experiences with him were very special and still fill me with delight when I think about it.


Flesh to Thy bone, flower to Thy rod!
With hoofs of steel I race on the rocks,
Through solstice stubborn to equinox!
And I rave, and I rape, and I rip, and I rend,
Everlasting world without end,
Mannikin, maiden, Maenad, man,
In the might of Pan!
IO Pan! IO Pan Pan! Pan! IO Pan!"