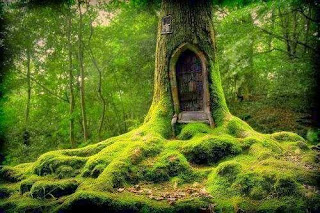 The frame work of ceremony I followed in the early years my magic carrier were based on the Neophyte and Grade initiations of the Golden Dawn. I worked the elements by following an outlined based on the Grade ceremonies in order to scry and commune with the elemental beings of each realm. My  first experience with this method was introduced to me by an Adapt of the Golden Dawn.

In my early days of practicing magic, I was very influenced by the visionary works of Dee and Kelly as well as Crowley with his infamous Vision and the Voice. I was fascinated by the idea that magicians could view the invisible through ceremony and scry stones in order to gain knowledge and power. Naturally, a young magician like myself would want to gain esoteric knowledge from spirits and be able to predict the future.

I recall voicing my fascinations to a more experienced magician and he informed me of the Golden Dawn making use of tattwa cards to interact with elemental beings. Tattwa cards used specific elemental images of the Samkhya Hindu philosophy to symbolize the basic elements. A yellow square for earth, a blue circle for air, a red triangle for fire, a silver crescent moon for water, and a black or deep indigo egg for spirit/akasha.

I sat out to acquire Dr Mumford's book and card set Magical Tattwas, and straight away began to attempt the exercises in the book. One of the main objectives of the exercises is to "see" the tattwa image within your mind and project yourself through the image into the elemental landscape. I spent long hours attempting to open visualize the images with my eyes closed and see the "portal" so often described to little avail. However, despite not yet having the ability to see the elemental landscape, I was getting quite good at simply seeing the tattwa image in my mind.

I vented my frustrations with my progress after a couple of months to the same more experienced magician. He suggested that we open an elemental temple and then try scrying the tattwas. Admittedly, I was uncertain how a ceremony would improve the ability to scry, it seemed to me that all the action would produce the opposite state of mind I was striving for. Regardless of my feelings, I decided to go along with the ceremony.

The next day I went to the park to try and get in touch with earth elementals. I found a shady spot under a tree where the soil was rich and soft. I introduced myself quietly and sat around for a while, I thought I felt a presence like being watched but eventually gave up and decided to leave. I touch a small amount of soil with me for the ceremony that would take place the following evening.

We prepared the space for the ceremony by doing a Lesser Banishing Ritual of the Pentagram. Then we cleansed and incensed the space with water and frankincense. I was given the task of doing the invocation of Earth. I had spent the day practicing tracing the Earth invoking pentagram while intoning the God names of the Zealtor ceremony. I felt my whole body shaking while I drew the pentagram while intoning the names. The room began to feel animated and a lamp flickered on and off while I said each name.

The presence of the spirits fully invoked I picked up my little dish of soil and sat down in front of the altar where a the tattwa for earth was on display. I gazed into the yellow square and felt my consciousness begin to move into the image. I closed my eyes and saw the portal! I instinctively walked through and saw a landscape of rolling hills. It was like looking at a television screen. Suddenly I saw squat ugly little men in funny clothing coming over the hills. They were dancing and singing a strange little song. It seemed like they were watching me as I was watching them. They began to dig gold out of the ground and offered me handfuls of it.

Slowly the vision began to fade and I found myself back in the temple. I took a moment to regain my bearings and looked around the room. I was informed that I was in a trance for a very long time. Excitedly, I explained everything I experienced and I was surprised that no one else had such intense visions. It was suggested that because I was the one who did the invocations that I would have the more potent visions.

After that ceremony I began to experiment more with using God-names before scrying with similar success. I found myself being requested to be a scryer for ceremonies after I developed the skill. It even translated into my tarot reading abilities as I began to see things when I looked at the cards. I still employ a similar technique to this day when I wish to speak to angels in a crystal ball.